Ye did an interview with Hollywood Unlocked, in which he seemed to be saying security at Kim’s house prevented him from seeing his kids, and he says the reason is that Pete Davidson was inside.

Our Kim sources say Kim is committed to co-parenting with her soon-to-be ex-husband and is not restricting him — in fact, we’re told she goes “above and beyond” — but it’s pretty clear they’re not seeing eye to eye.

Entertainment Tonight talked to Jason Lee from Hollywood Unlocked and provided some short excerpts of his interview with Kanye, who said, “Earlier this week, Monday, when I went to go pick my kids up from school, the security stopped me at the gate. So, at that point, security was in between me and my children and that’s what was not going to happen.”

As we reported, Kanye has been going at Pete, rapping in his track with The Game — “Eazy” — “God saved me from the crash, just so I can beat Pete Davidson’s ass.”

Kanye seemed triggered by Kim’s “Saturday Night Live” hosting gig, where he came face-to-face with Pete … “How you gonna bring me to ‘SNL’ and kiss the dude you dating right in front of me, and everybody’s like, ‘awww, that’s cool.'” 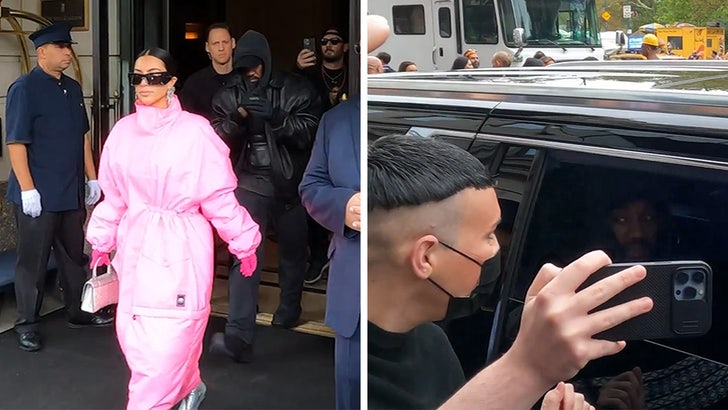 Kanye also told Jason Lee the reason he punched a guy early Thursday morning, saying the guy wasn’t a fan — he was getting autographs to make money … “This is the same as the paparazzi, this is not a fan. This is someone who is using your image, who probably never listened to your songs, are ones that are like, ‘This is my song, for real?'”

Kanye says he got triggered because his cousin’s, who were there, were supposed to talk to Kim about making sure he has access to his kids, but they hadn’t contacted her … “So, now my cousins are coming back and they have not delivered on it. So, I end up getting into an altercation with the guy that wanted to make money off of my autographs, then my cousin pulls up and she’s talking to me. I say, ‘Give me a breather. Get away from me.’ She is not taking accountability for the fact that she did not do what she was supposed to do, and that added to me being in a mood where I was like, ‘I am not going to have this.'”

And, then the punches … “I’m saying, ‘You don’t know what I’m dealing with right now.’ I just finished these two songs, I came from the studio. I created the record, this impromptu shoot, and my cousins went and did really deliver the mission. And, this dude just, he just had this real attitude, like, ‘Whatchu gonna do? And, see that?’ Imma just tell you, that blue COVID mask ain’t stop that knockout, you know what I’m saying.”

Kanye allegedly punched the guy twice, and he hit his head on the pavement. The LAPD is investigating Kanye for possible criminal battery charges.