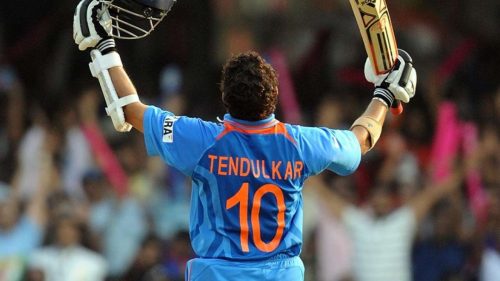 Sachin Ramesh Tendulkar was much more than a player. He was a class-apart and a celebrity. The class with which he used to bat is inimitable, and so are his records. He averaged 53.8 in 200 Test matches and 44.8 in ODIs. He has played numerous innings that have steered India to victory. However, some innings have earned him a spot in the hall of fame. These have made it to our list of the best Sachin Tendulkar innings:

1. The first twin-ton by a player in an ODI match

Sachin Tendulkar is a man of records, be it the highest runs in Tests or the first-ever 200 scored in an ODI. The Gwalior Stadium in 2010 became the hub for the first double-century in the ODIs. Sachin Tendulkar achieved this milestone against South Africa with an innings of 200. Tendulkar took 147 balls to reach the score with 25 boundaries and 3 sixes. The South African bowling unit had Dale Steyn, who went for 89 in his 10 overs. India went on to seal the match despite a ton by the fiery AB De Villiers.

Sachin Tendulkar made his first century against the seasoned pace battery of England. A 17-year old playing classy drives against Angus Fraser and others in the line-up is always a sign of greatness. Tendulkar scored 68 in the first innings as well, but the match ended as a draw. This inning established him as a core part of India’s batting line-up, including Azharuddin, Vengsarkar, and Kapil Dev. Batting alongside these greats and yet standing out is proof of excellence in the game. His first century was also unique because it did not come on the home soil; it came against England in England.

This inning makes it to the list because Sachin Tendulkar became the only player to score 100 centuries. Yes, India lost the game against Bangladesh, but the god of cricket became immortal. Sachin took 147 deliveries to reach this milestone and batted consciously. While this may not be his best, it will be remembered by cricketing fans across the globe. This was his last century in One-Day Internationals and the first against Bangladesh. Tendulkar got another record on his list of records.

4. 194 vs. Pakistan in Multan: The double-ton that was there for the taking

While Sehwag stole the limelight here with his triple century, Tendulkar was all set for his double-ton. He was batting on 194 when captain Rahul Dravid declared the innings, a move that sparked criticism. Tendulkar’s innings included 21 fours, and he played with complete confidence against the Pakistani bowling attack. It was unfortunate that he missed out on a double-ton, but captain Dravid may have had his reasons.

India was chasing 273 in the game against Pakistan. The fall of two wickets pushed India under pressure, and in such circumstances, the god of cricket fought back. Tendulkar played a clinical knock of 98 of just 75 balls and sealed the match for India. Tendulkar’s innings included 12 fours and a six. Tendulkar fell to Shoaib Akhtar later in the innings, but Yuvraj and Dravid drove India home.

Humble, calm, and yet fierce: What made Tendulkar so different?

These innings earned Sachin Tendulkar the title of a match-winner. Mathew Hayden, the legendary Aussie batsman, was quoted saying, “I have seen god, he bats at number 4 for India.” Tendulkar’s career lives true to all the awards, honors, and names bestowed upon him. Tendulkar stayed on top of the rankings for a long period, and he was consistent with the bat.

The calmest player on the field was also intimidating for the best bowlers of his time. 15921 runs in Test matches, 18426 runs in ODI matches, and 100 centuries in the entire career; these are magical numbers. Sachin Ramesh Tendulkar will be remembered as the greatest batsman in cricket history, only second to Sir Don Bradman.